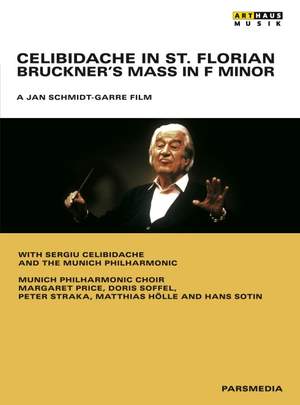 A Film by Jan Schmidt-Garre

this is a conducting masterclass at a level of detail and insight that is rarely permitted today. — BBC Music Magazine, February 2014, 4 out of 5 stars

Sergiu Celibidache conducts Anton Bruckner’s Mass in F minor, which Bruckner called “the most difficult of all masses”. The film documents the work process from the first rehearsals with piano and choir to the eventual integration of choir, orchestra and soloists. The musical structure, initially created in Munich, is adapted to the acoustic requirements of St. Florian, and then performed in concert. Anton Bruckner was the organist at St. Florian as a young man and wrote many of his masterpieces here – he is buried underneath the organ.

“Sergiu Celibidache’s work on Bruckner’s Mass in F minor can indeed be regarded as a testament. However, it needed a highly sensible and musical video director like Jan Schmidt-Garre to capture this testament in an adequate fashion. Technical advances brought with them greater challenges for fi;ming teams, and an accomplishment like that of Schmidt-Garre stands quite alone, unfortunately.” Opernwelt

Bonus: Guest appearance of Sergiu Celibidache and the Munich Philharmonic in Moscow during a state visit, 1989

this is a conducting masterclass at a level of detail and insight that is rarely permitted today.