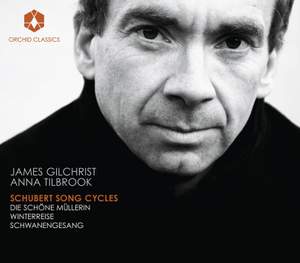 No. 4. Danksagung an den Bach

No. 3. Leichte Segler in den Hohen

No. 4. Diese Wolken in den Hohen

The set – which includes Schubert’s popular Müller settings: Die Schöne Müllerin and Winterreise, alongside the Schwanengesang cycle - traverses the range of human emotion: from hope to despair, obsession to anguish, life to death. These works from his final years reveal a composer reaching extraordinary depths, exploring the darker side of the human psyche.

The recordings have all received numerous accolades on their first release as single CDs, Die Schöne Müllerin receiving Editor’s Choice accolades from both Classical Music magazine and ramophone upon its release, with the latter describing the performance as “Among the very finest of modern versions”.