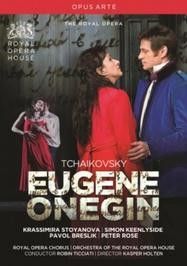 Kasper Holten's inaugural production as Director of Opera for The Royal Opera returns to Pushkin's verse novella to reveal the shadows of memory which haunt Tchaikovsky's lyric tragedy. Using doubles to suggest the paths taken, or not taken, by its two impulsive protagonists, Holten gives eloquent voice to the loss and regret that lies at the heart of Eugene Onegin. Simon Keenlyside and Krassimira Stoyanova bring both experience and dynamic energy to the pair of protagonists, while the youthful, 'heartrending' tenor of Pavol Breslik and the idiomatic sweep of Robin Ticciati's 'inspired' conducting (The Independent) were enthusiastically received at the premiere of this visually opulent staging.