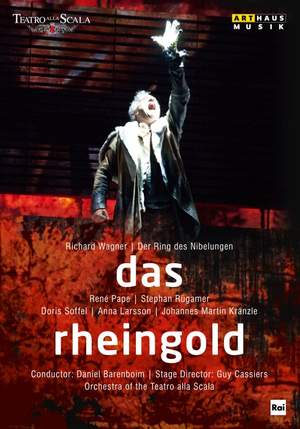 The La Scala Rheingold in May 2010 inaugurated Guy Cassiers Ring-Cycle and introduces a completely new paradigm to this work. While before him Patrice Chéreau had laid his focus on a historical analysis from 1870 to 1930 Germany, Guy Cassiers’ Ring unfolds “from our own present-day moment; it [takes] place in ‘the now’, the Jetztzeit (Walter Benjamin), placing our present and our future into the context of the promises and curses that we have inherited from history … The Cassiers Ring shows how the globalized moment of 2010 continues to build on the Wagnerian vocabularies of 1870.” (Michael Steinberg)

Cast with a number of opera stars like René Pape, Stephan Rügamer, Johannes Martin Kränzle and Anna Larsson and conducted by Daniel Barenboim, this Rheingold is bound to put the audience under its spell.

[Pape's] “Abendlich strahlt der Sonne Auge”...is one of the finest anywhere...Kränzle is superb, creepy, evil and clearly intelligent. Casting is, in fact, good throughout...a stimulating and impressive beginning to Barenboim's most recent cycle.