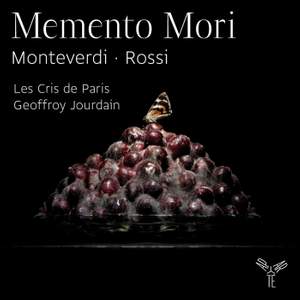 These 'moral cantatas' play on the 'affetti', ie they were used to heighten the devotional feelings of those attending sermons in Roman oratories, or prayer halls, in the early years of the 17th century. In these oratories informal meetings were held which used the vernacular (Italian instead of Latin) and in which music became a significant factor in attracting participants.

Those who commissioned such works [cardinals, popes, noble families] had long been aware of the attractive potential of secular genres. The ancient practices of laude, basso ostinato and lamenti, as well as popular new musical genres including opera, were able to flourish in the oratories as a vehicle for spiritual messages.

The booklet-essay raises doubts as to the attribution of these works to Rossi and supposes that they were probably written for a period of penance in the liturgical year, perhaps during Lent. In each of the works on this recording the alto vocal part usually taken by a contralto or falsetto voice is performed by a tenor: a personal, rather than musicological choice taken by Geoffroy Jourdain.

The singers pay much attention to the text and the delivery is as it should be. The dramatic character of this repertoire and the contrasts in text and music come off very well… This is a fine disc with enthralling repertoire and overall good and expressive performances.