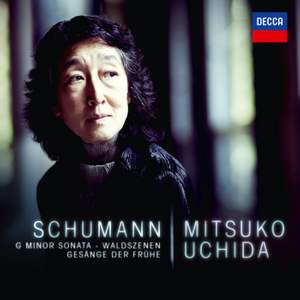 Dame Mitsuko Uchida, universally acknowledged as one of the world’s foremost Schumann interpreters, follows her last album of the composer’s music (Davidsbündlertänze and Fantasie in C) with another sublime Schumann programme.

Uchida’s latest Decca recording brings together the romantic fire and intensity of the Piano Sonata No. 2 in G minor Op. 22 with two remarkable works from Schumann’s final years, Waldszenen and the Gesänge der Frühe.

Her album’s repertoire explores music created by an artist burdened by deep depression and mental illness. His Gesänge der Frühe (“Songs of Dawn”) were sketched within the space of four days in February 1854, shortly before Schumann attempted to commit suicide by throwing himself in the Rhine. The work proved to be his last complete piano composition.

Uchida makes a strong case for works she clearly loves

This is such thoughtful and thought-provoking playing. Uchida at her best, in other words, which is quite something.

Uchida brings to them a profound thoughtfulness and discretion, an acute endorsement of Schumann’s late style. Her accounts of sonata and lyric pieces are new-minted and captivating.

Uchida is still a queen of her instrument: her phrasing heartfelt, her tone warm and her responsiveness to mood acute...She plays with sweeping scope but, especially in the “Gesänge der Frühe” (“Songs of Dawn”), incredible intimacy, too.