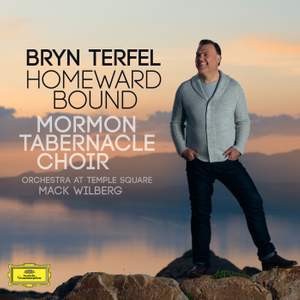 he’s an eloquent actor as well as a singer, and you swallow every word he utters in Homeward Bound, a relaxed, warming collection...Terfel, most importantly, never sounds like a tonsil superstar... — The Times, 6th September 2013, 4 out of 5 stars More…

Lowry, R: Shall We Gather At The River

trad.: How Great Thou Art

trad.: Battle Hymn of the Republic

Boatner: When The Saints Go Marching In

Andersson: Give Me My Song

The lead track, the eponymous Homeward Bound, is a stunning emotional show stopper

Recorded in Salt Lake City in May 2013, this “event” record is set to thrill classical audiences on both sides of the Atlantic – and beyond

Known as “America’s Choir”, and currently the best-selling classical act in the US, this extraordinary American musical institution was founded 166 years ago by American Pioneers, migrating at the time from the Midwest to Salt Lake Valley. Many of the original Pioneers included Mormons hailing from Wales – a connection that Bryn will make through music and song on this popular vocal and choral programme

Prepare for the thrilling prospect of the 360-voice Mormon Tabernacle Choir and a full symphony orchestra, united in song with the acclaimed bass-baritone Bryn Terfel – a unique event and a unique album.

he’s an eloquent actor as well as a singer, and you swallow every word he utters in Homeward Bound, a relaxed, warming collection...Terfel, most importantly, never sounds like a tonsil superstar standing at a mike...the great Bryn still has the power to make us believe.