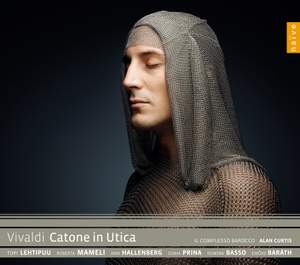 this is a fascinating and apt reconstruction and there is some marvellous stuff here...This recording includes outstanding contributions from Roberta Mameli (Caesar), Ann Hallenberg (Emilia),... — BBC Music Magazine, December 2013, 5 out of 5 stars More…

Vivaldi: Catone in Utica, RV 705 (reconstructed by A. Ciccolini)

Naive’s Vivaldi Edition is proud to present the 15th opera, and the 50th release, in the acclaimed series. Conducted by one of the masters of baroque opera, Alan Curtis, and gathering an impressive, vocal cast from the top echelons of Baroque singing 'Catone in Utica' is one of the Venetian master’s great, late operas. Composed four years before his death and premiered at Verona in the spring of 1737, 'Catone' inaugurated Vivaldi's third and last opera season. The Red Priest's farewell to the Teatro dell’Accademia Filarmonica was to resemble the crowning piece of a fire-works display.

Right from the first performances, the success was such that Vivaldi could write to his Ferrara protector, the Marquis Guido Bentivoglio, "Here, thanks be to God, my opera is praised to the skies! We gave only six performances, and yet, having done all the accounts, I know for sure that there will be no losses; on the contrary, if God blesses the season to the end, there will be a profit, and not a negligible one."

The autograph score, conserved in volume 38 of the Foà Collection in the Biblioteca Nationale in Turin, contains only Acts II and III of the opera. In all probability, the loss of the first act occurred at some stage during the eventful history of Vivaldi’s collection, which was constantly moved from place to place between 1741 and its rediscovery in 1926.

The two surviving acts demonstrate how carefully the composer-impresario had planned his final production for Verona. The eleven arias and coro are products of his high maturity, very finely worked, in which he continues his brilliant endeavour to combine his musical language with that of the Neapolitan composers.

this is a fascinating and apt reconstruction and there is some marvellous stuff here...This recording includes outstanding contributions from Roberta Mameli (Caesar), Ann Hallenberg (Emilia), Sonia Prina (Martia) and Topi Lehtipuu (Cato).

Il Complesso Barocco is always well-balanced with excellent ensemble and fine string tone. The music is sensitively and thoughtfully phrased, and the players easily set the mood at the beginning of each aria...This is a truly outstanding recording of one of Vivaldi’s finest works

Alessandro Ciccolini has reconstructed most of the missing music, and the results sound utterly convincing. The cast, all but one of them women (three singing male roles), is impressive of voice and brilliant of technique. Curtis’s direction is pacy.

The performance is glorious. The conducting and the playing have tremendous energy, and the singing is to die for. Ann Hallenberg's sensational Emilia rightly dominates.

In a strong cast Roberta Mameli’s Cesare and Ann Hallenburg’s Emilia stand out, albeit they have the advantage of singing the opera’s finest arias. Mameli’s beguiling ‘Se mai sentry spirarti sul volo lieve’ is the highlight, though Hallenburg’s anguished ‘Nella foresta’, punctuated by fierce horns, is hardly less enthralling.