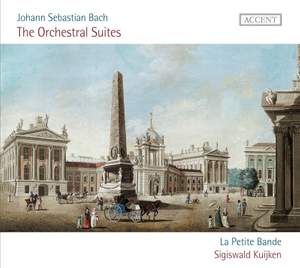 In the hands of skilful players such as these they sound convincing and that equally applies to all the musicians of La Petite Bande. — BBC Music Magazine, January 2014, 5 out of 5 stars More…

Following the Brandenburg Concertos, Sigiswald Kuijken now presents a new recording of the four Orchestral Suites by Johann Sebastian Bach with his ensemble La Petite Bande. Orchestral suites in the French style, in which the actual overture is always followed by a series of dances or characteristic movements, were quite well known during Bach's time at courts throughout Europe. The splendour of the Versailles court of Louis XIV and XV was imitated everywhere, and music was of great importance in this respect.

Sigiswald Kuijken has chosen a rather small ensemble for the present recording; the particular advantage of this approach is in the transparency of the voice-leading. Alongside the harpsichord, the bass group consists of one or two so-called 8-foot violones: a bass instrument significantly larger than the baroque cello and which produces a considerably more resonant sound due to its larger body and thicker strings. What is especially remarkable about this recording, however, is the exclusive use of natural trumpets without auxiliary holes - customary today but in fact historically incorrect.

In the hands of skilful players such as these they sound convincing and that equally applies to all the musicians of La Petite Bande.

The resulting chamber music quality of these performances is refreshing, enabling one to hear the detail of the contrapuntal inner parts that is lacking in so many other recordings… Enjoy these moments… Even if you have another recording of these suites, do get this one.

There are few musicians who appear more steeped in their worlds than Sigiswald Kuijken and one sense that Bach's pure instrumental vein frees his spirit like none other...a mesmerising purpose, natural balance and transparency of sound bring these works alive with quite remarkable results.