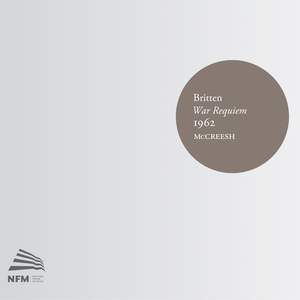 [McCreesh's] New College choristers have the ideal mix of celestial glow and nimble impatience; his orchestra is wonderfully articulate. And the sound picture has the greatest depth of range... — BBC Music Magazine, Christmas 2013 More…

Following their acclaimed recordings of Berlioz’ 'Grande Messe des Morts' and Mendelssohn’s 'Elijah', Paul McCreesh has once again assembled the mass forces of Gabrieli Consort & Players and Wroclaw Phiharmonic Choir to record one of the iconic masterpieces of the 20th-century oratorio repertoire.

The work reflects Britten’s long-held and committed pacifist beliefs. Composed to mark the consecration of a new Cathedral in Coventry, Britten combines the Latin text of the Missa pro Defunctis with nine poems by the First World War poet Wilfred Owen, which provide a moving (and frequently uncomfortable) commentary on the liturgical text.

This series has already garnered substantial critical claim and a number of prestigious awards, including a BBC Music Magazine Award for Technical Excellence and two Diapason d'Or awards.

[McCreesh's] New College choristers have the ideal mix of celestial glow and nimble impatience; his orchestra is wonderfully articulate. And the sound picture has the greatest depth of range and recording… the profundity and coherence of McCreesh’s reading sets a new standard for this work.

McCreesh is in total command of his forces, and they are ever alert and responsive to his direction. With a superb complementary essay and imaginative packaging, this is a very attractive alternative to the composer’s own recording.

Ainsley is almost unbearably tender in 'Move him into the sun' and Maltman, apart from a few moments when he sounds pushed, is thoughtful and restrained. With Susan Gritton proving a clever choice for the soprano soloist, there are no weak links.

McCreesh brings clarity and some superb solo singing to his version

this newcomer enters a distinguished field. One element that marks it out immediately is the contribution of Christopher Maltman who gives one of the best, most nuanced performances of the baritone solo role that I’ve ever heard...McCreesh yet again shows himself to have full command of very large forces...His control is especially impressive.

the transparency of the textures and the crisp outlines are a delight. You hear more of the subcutaneous detail of Britten's scoring, I think, than on any previous recording... If sometimes the performance seems a little undersized, it's still totally involving.

thrilling in many places (notably the Dies Irae and the great outcries of the Sanctus ), and slightly muffled in others. What do emerge beautifully are the mainly consoling solo voices of Susan Gritton, John Mark Ainsley and Christopher Maltman