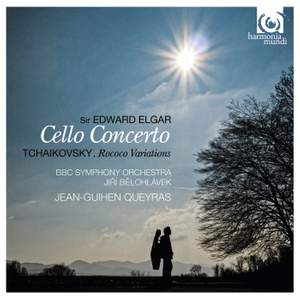 No note or tone is misplaced, with harmonics especially pure, and a judicious use of vibrato means that Elgar's loping first-movement Moderato begins very purely indeed. It's refreshing not to... — BBC Music Magazine, November 2013, 3 out of 5 stars More…

"Composed 40 years apart, these two masterpieces from either side of the turn of the last century offer, in their intrinsic contradictions, a fascinating mirror effect. Thus the profound nostalgia of Sir Edward Elgar’s Concerto stands revealed in its lighter themes, which gain the upper hand in the second movement and a fair bit of the finale.

Similarly, the 'Rococo Variations', far from being just an entertaining stylistic exercise, conveys a deep underlying melancholy in the slow variations, while the divine harmonies of Tchaikovsky, who is the supreme master in that respect, reveal a genuine and discreet tenderness. Maestro Belohlávek is a great source of inspiration to me. I find in him a discretion, an accessibility and a profundity that remind me of Pierre Boulez in an entirely different repertory. What’s more, he was an excellent cellist in his early days and so he has our repertory at his fingertips, literally and figuratively. He was able to give me some valuable advice during the recording sessions!" Jean-Guihen Queyras

No note or tone is misplaced, with harmonics especially pure, and a judicious use of vibrato means that Elgar's loping first-movement Moderato begins very purely indeed. It's refreshing not to have the Concerto larded with sentimentality; but I miss an extrovert swagger...Best is Dvorak's Silent Woods.

Queyras is a commandingly secure and articulate soloist, and he enjoys attentive, typically selfless support throughout from Jiri Belohlavek and the BBC SO...Watkins's endearingly communicative and deeply tender advocacy in particular really does touch to the marrow every time...both the lovely Dvorak miniatures are idiomatically surveyed.

Queyras is a fine cellist, fluent technically and gifted with a flexibility of tone that can range from a warm richness to a resiny tang and to sweetness in the upper registers into which both Dvorak and Elgar take him.

the antithesis of the youthful Jacqueline du Pré’s firebrand approach. That is not to say that Queyras lacks passion the opening chords are bold and he soars in the opening movement’s moderato and the allegro non troppo of the finale. Belohlavek and the BBCSO are idiomatic partners

A rich and warm recording with a finely judged balance between orchestra and soloist adds to the excellence, but more important is the high level carefully rehearsed detail in the orchestral parts under Jiri Belohlavek’s direction.

Technically, the performance is a marvel. The mellow timbre of his 1696 Gioffredo Cappa instrument is a pure joy. But allied to that...there is the sense that Queyras has made this recording through genuine love and perception of the Elgarian language...When it comes to mulling over discs of the year, this one will be a definite front-runner.

I'm a fervent admirer of French cellist Jean-Guihen Queyras, particularly for the incredibly neat, compact and refined quality of his playing, elements that here bring an aura of sophistication and tremendous intellectual integrity to his new recording of the piece, with Jiri Belohlavek and the BBC Symphony Orchestra in immaculately responsive and sympathetic accompaniment

Queyras’ lack of sentimentality and his sense of drive in the Elgar are very welcome, as is the urgent and ripely idiomatic contribution for an orchestra currently at the top of it game. The Tchaikovsky Rococo Variations has great poise and zest, and as a bonus we are treated to two short pieces by Dvorak...which could scarcely have been done better