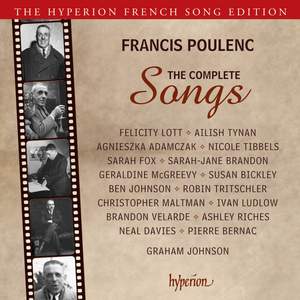 The greatest hero of the set remains Graham Johnson himself. As well as writing the booklet notes and organising the whole adventure, Johnson proves himself to be the most sensitive and accomplished... — MusicWeb International, December 2013 More…

Graham Johnson is simply the greatest living authority on French song; an artist whose innate feeling for the music is combined with prodigious scholarship. He also has the ability to discover and nurture singers who here prove to be matchless performers of this repertoire.

Following his many wonderful recordings in Hyperion’s French Song Edition, Johnson turns to the complete songs of Francis Poulenc, released also to mark the fiftieth anniversary of the composer’s death. Each of the four CDs presents a programme of songs in an order that is chronological for that disc alone—signifying four different journeys through the composer’s career. Disc 1 features a substantial appearance, recorded in 1977, of Pierre Bernac (Poulenc’s long-term collaborator)—narrating L’histoire de Babar, a story known to children throughout the world. The singers include Dame Felicity Lott, acclaimed as one of the foremost performers of Poulenc, and many other stars from previous recordings.

The greatest hero of the set remains Graham Johnson himself. As well as writing the booklet notes and organising the whole adventure, Johnson proves himself to be the most sensitive and accomplished of accompanists, ensuring that every single song is a partnership between singer and pianist, with chemistry that flows both ways.

Prepared for the fiftieth anniversary of the composer's death last year and curated by pianist and French music expert Graham Johnson, Hyperion's gorgeous 4-CD set divides the complete songs between seasoned performers such as Felicity Lott and Johnson himself, and stylish newcomers including soprano Ailish Tynan and tenor Robin Tritschler.

As always, Johnson matches singers to songs meticulously. There are some outstanding performances...It's a gorgeous collection, and for sometime Poulenc sceptics like me, a real revelation.