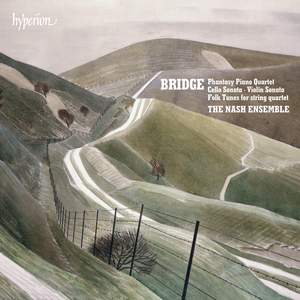 What this beautifully played and thoughtfully programmed disc has going for it are, first, that it presents these works in a chronological survey of Bridge's chamber output...Altogether, a valuable... — BBC Music Magazine, December 2013, 4 out of 5 stars More…

Bridge: Sally in Our Alley

Bridge is best known through his most famous pupil, Benjamin Britten, who recognized his teacher’s genius and frequently programmed his works. The Phantasy Piano Quartet, completed in June 1910, reveals Bridge’s early style at its most fluent. Writing in the 1948 Aldeburgh Festival programme book, Benjamin Britten revealed the essence of this work perfectly: ‘Sonorous yet lucid, with clear, clean lines, grateful to listen to and to play. It is the music of a practical musician, brought up in German orthodoxy, but who loved French romanticism and conception of sound—Brahms happily tempered with Fauré.’

In his later works, represented here by the Cello Sonata and Violin Sonata, Bridge made use of more angular melodies, and seemed influenced by contemporary trends in Europe, much to the dismay of critics at home. Britten staunchly defended Bridge and writes about ‘the invariable fascination of the sound; the conversational melodies can be difficult to recognize, but the drama and tensions easy to feel’.

Also included are folk-song arrangements in which Bridge absorbs the material into his musical fabric, taking creative ownership of the melodies.

What this beautifully played and thoughtfully programmed disc has going for it are, first, that it presents these works in a chronological survey of Bridge's chamber output...Altogether, a valuable addition to the ever-growing Frank Bridge discography.

Throughout, there's an identifiable melodic flow, initially comparable to Faure, and then Bridge's characteristic harmonic idiom developed from the techniques of Scriabin and early Berg.

The sonata receives a wonderfully searching performance from Paul Watkins and Ian Brown...[in the Violin Sonata] the earlier lyricism is there, but as just one part of an expressive web. Thorsen and Brown catch those moodswings perfectly