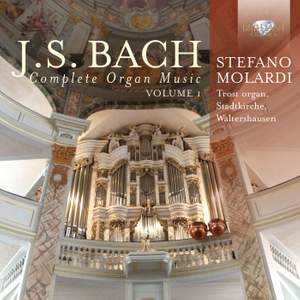 Stefano Molardi is shaping his recorded survey of Bach’s complete organ music as self‐sufficient and musically satisfying recitals which, disc by disc, explore the diverse styles at the composer’s disposal, the flexible usage to which he, the ultimate “compleat musician”, puts “his” instrument through its paces, and the different liturgical demands which he was required to meet during the course of his career as he moved from church to court and back again. Grand Weimar‐ and Leipzig‐composed preludes and fugues rub shoulders with intricate trio sonatas which he had initially conceived as chamber music, and between them nestle intimate chorales from his Cöthen days.

Accordingly, Molardi makes full use of the potential flexibility of his chosen Trost organ in the Stadtkirche “Zur Gotteshilfe” in Waltershausen, deep in the provincial heart of Thuringia. This is Bach country, and although the organ has been periodically restored since it was finally inaugurated in 1755, almost 30 years after the work was begun, it retains the classic characteristics of its age and situation: a thorough restoration in 1998 returned the instrument to its original glory.

Born in Cremona, Molardi has undertaken a Renaissance career as not only organist but harpsichordist, conductor and scholar, not only at home in the rarified confines of early music but a virtuoso who has performed the complete organ works of Liszt and Franck and made an extraordinary recording of Verdi arranged for organ. These Bach discs are, perhaps appropriately, less overtly spectacular but no less imaginative in their rhythmic and coloristic response.