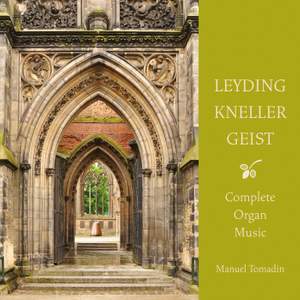 Manuel Tomadin follows up his first album for Brilliant Classics, of Weimar-composed chorales by J.S. Bach (94456), with some little-known musical treasures from Hamburg c.1700 complemented by a bona-fide rarity by Bach, a chorale fantasia believed to date from between 1705 and 1710 and rediscovered as recently as 2008.

Georg Dietrich Leyding, Andreas Kneller, Christian Geist may hardly be more than names even to organ aficionados nowadays, but they were all active and original composers in North Germany in the latter years of the 17th century, a generation or so younger than Johann Sebastian. Most of their music is lost, but Manuel Tomadin presents here all their extant works for organ, on a fine Dell'Orto & Lanzini organ, at Nostra Signora di Fatima, Pinerolo (2011): a modern instrument built with Barock principles in mind. These works range from Geist's relatively simple chorale settings to some elaborately florid chorale fantasias and preludes by Leyding and Kneller, demanding considerable virtuosity of the kind that would have delighted the great Bach himself.

Tomadin has made a specialty of this musical period and repertoire. He was Young ECHO Organist of the Year 2012, having won the ninth Internationaal Schnitger Orgelconcours during the Orgelfestival Holland in June 2011 in Alkmaar. He was born in 1977 but has already made recordings on various instruments of historical importance; he enjoys a high reputation among the organ fraternity.