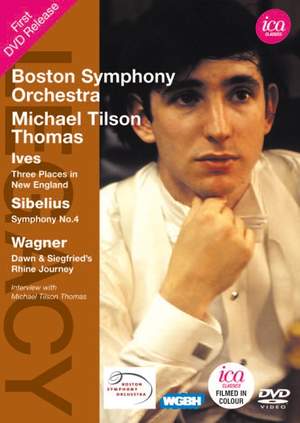 Michael Tilson Thomas first conducted the Boston Symphony Orchestra at the age of twenty-four, when he was called on to replace William Steinberg midway through a concert on 22 October 1969. This turned out to be the beginning of an extremely varied and exciting career that continues to this day. Even at this very early stage, Tilson Thomas had already worked with Stravinsky, Copland, Boulez and Heifetz, and he has since been made a Chevalier de l'ordre des Arts et des Lettres of France and won ten Grammy Awards for his recordings.

In 2010, President Obama awarded him the National Medal of Arts, the highest award given to artists by the United States Government.

In 1970, Tilson Thomas recorded a series of spring concerts with the BSO – and this DVD features titles from that period. Tilson Thomas has long been a champion of the composer Ives, and here conducts Three Places in New England in a concert recorded at Symphony Hall in Boston on 13 January. As Tilson Thomas says, ‘Ives’s music is gleeful, goofy, ecstatic and nostalgic, but always in the service of his larger goal, which is like Mahler’s: to create a whole musical world.’ The second piece featured is Sibelius’s Symphony No.4 – a notoriously difficult and rhythmically demanding work that Tilson Thomas handles with a brooding grace, enhancing and drawing out the immaculately and intricately created textures. Tilson Thomas studied with Wagner’s granddaughter, Friedelind, and subsequently spent the summer of 1966 as assistant conductor at the Bayreuther Festspiele.

Fittingly, then, the programme finishes with Wagner’s ‘Dawn’ and ‘Siegfried’s Rhine Journey’ from Götterdämmerung – a performance full of excitement and rhythmic vitality.

The DVD also features an exclusive interview with Michael Tilson Thomas, providing a fascinating insight into the performances captured here on film.

This is the first release of this material on DVD.

The music isn’t just a riot and the nostalgic, elegiac sections are also beautifully done. There are a few things that are striking about the young conductor. He is very confident and his technique is assured with an immaculate, clear beat.