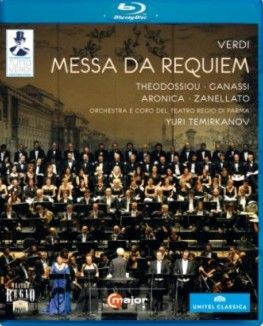 The soloists are all very satisfactory but the performance, whilst precise, is not urgent and indeed seems a bit slow. — MusicWeb International, 13th February 2014

This Requiem fields an outstanding cast of singers, all with glittering international careers.

The documentary introduces us to Verdi’s beautiful “homeland”, the region of Parma.From the little village called Le Roncole in the vicinity of Parma, where Verdi was born, to the estate close to Parma, where Verdi – despite the great triumphs he celebrated in Milan, Venice, Naples and other major cities – always came back to and chose to spend most of his life. We get to know how Verdi “lives on” in the region and has even formed the area – from the everyday life of a simple peasant to the life of one of the biggest opera stars in the world, Leo Nucci, who is a regular guest at the Verdi Festival in Parma.

The soloists are all very satisfactory but the performance, whilst precise, is not urgent and indeed seems a bit slow.