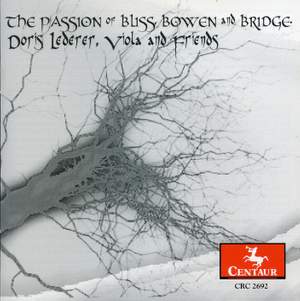 The Passion of Bliss, Bowen and Bridge

Bowen: Rhapsody for viola and piano

"The Passion of Bliss, Bowen and Bridge" features works for viola and piano by the three English composers, performed by Doris Lederer and friends.

York Bowen (1884-1961) and Frank Bridge (1879-1941) were both violists as well as composers and conductors. Bowen achieved considerable success in his lifetime, however, many of his works remained unpublished and unperformed until after his death. Bowen considered the tone of the viola to be superior to that of the violin and composed numerous works for the viola, championing a campaign to increase the instrument's popularity. Frank Bridge played the viola in a number of string quartets including the English String Quartet. He privately taught Benjamin Britten and when Britten left the US in 1939, Bridge presented him with his Giussani viola. His 'Lament for two violas' was written for Lionel Tertis in 1912. The original manuscript did not survive however, an almost complete ink sketch did remain. Arthur Bliss (1891-1975) composed many chamber works during the 1930s including the Viola Sonata for Lionel Tertis in 1933.

This album was recorded in 2003 at the LSO Recital Hall, Louisiana State University, Baton Rouge.