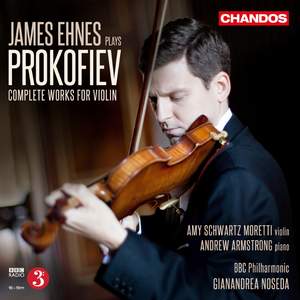 I have not heard such a beautiful performance of the First Violin Concerto since Itzhak Perlman's 1982 EMI recording, and Ehnes enjoys the advantage of a more natural balance with the orchestra...Ehnes... — BBC Music Magazine, December 2013, 5 out of 5 stars More…

Prokofiev: Five Melodies for Violin and Piano, Op. 35a

I. To Paul Kochanski. Andante

This two-CD set offers all the works that Prokofiev wrote for the violin as solo instrument. One of the most sought after and acclaimed virtuoso violinists today, James Ehnes is accompanied by the BBC Philharmonic conducted by Gianandrea Noseda and by the pianist Andrew Armstrong, with whom he has previously made a number of highly acclaimed Chandos recordings. The distinguished Amy Schwartz Moretti joins him in the Sonata for Two Violins.

The First Violin Concerto, begun in 1913 and completed in the summer of 1917, did not receive its first performance until 1923. There is much charm and gentle tunefulness in this work, written during a comparatively lyrical period in Prokofiev’s compositional life, though it is not without passages of bravura, especially in the brilliant central scherzo. The Second Concerto was premiered in 1935 and in feeling and atmosphere inhabits the world of the ballet Romeo and Juliet. The beautiful opening Russian theme is highly seductive, though in the first movement there is an undeniable hint of anxiety. The central movement contains many varied and contrasting ideas whilst the finale is notable for the flamboyant use of the bass drum, which adds both piquancy and drama.

The contrasting Violin Sonatas are closely associated with the violinist David Oistrakh, with whom the composer formed a close association. The Second Sonata (composed first) is a transcription of the Flute Sonata of 1943. Simple, expressive beauty is the hallmark of this work, Prokofiev’s mixture of high-spirits and sharp edges, notably in the finale, having made it a popular repertoire piece. Of the more serious First Sonata (1946), David Oistrakh wrote: ‘this was truly great music, and indeed for sheer beauty and depth nothing to equal it had been written for the violin for many a decade.’ The Sonata for Solo Violin (1947) was written with students in mind, the deceptively simple theme imbued with the composer’s characteristic twists and quirkiness. Prokofiev composed the Sonata for Two Violins (1932) for the Parisian chamber music society Triton, and the composer felt that, ‘in spite of the seemingly narrow framework, it seemed possible to make it interesting enough for the public to listen for ten or fifteen minutes without a sense of fatigue’. The Five Melodies are charming transcriptions by Prokofiev of his Five Songs, Op. 35.

I have not heard such a beautiful performance of the First Violin Concerto since Itzhak Perlman's 1982 EMI recording, and Ehnes enjoys the advantage of a more natural balance with the orchestra...Ehnes smoothes some of the First Sonata's rough edges...yet its menace and brutality emerge clearly enough...a real winner.

Ehnes's particular combination of matchless virtuosity, sweet tone, flowing tempi and interpretative restraint suits all this music down to the ground. You sense that we are in for a special performance of the D major Concerto (No. 1) even before the soloist enters, Noseda eliciting a special quality of fairy-tale unreality.

[Noseda's] Russian immersion lends dividends...to Ehnes’s sizzling accounts of the two popular concertos...Just as compelling are the chamber works...Ehnes and his pianist give performances worthy of the giants (Oistrakh and Richter) for whom their parts were conceived.

In their mix of lyricism and sharp-edged rhythmic and harmonic piquancy, Ehnes and Moretti are absolutely spot on in defining the music’s character. This is playing that truly grabs you by the scruff of the neck and commands attention.

Wow. Everything works here. James Ehnes rarely disappoints, and the playing on this beautifully recorded two-disc set is immaculate. It’s not just the musicality, the remarkable ability to give shape and colour to the thorniest solo writing, but his modesty...Unmissable.