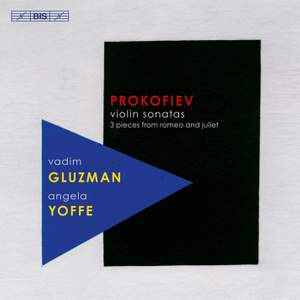 Act I: Dance of the Knights

Act III: Dance of the Girls with Lilies

Sergei Prokofiev first noted down some ideas for his Violin Sonata No.1 in the summer of 1938 and he began the composition that winter. It was later put aside, but when he was evacuated from Moscow after the Nazi invasion 1941, the unfinished violin sonata was one of the pieces Prokofiev took with him. It wasn't until 1946 that he completed the work, however, following it up with the equally dark Sixth Symphony. There is no doubt that it was bitter experience that made these works two of Prokofiev's most powerfully concentrated compositions. They capture the essence of a deeply serious side to his musical character, and it was highly appropriate that parts of the sonata were played (by David Oistrakh, the dedicatee of the work) at Prokofiev’s funeral in 1953. Oistrakh had also been instrumental in the coming into being of the Second Violin Sonata, which confusingly enough was composed before the first, and then not as a sonata for violin, but for flute: following the première of the flute sonata in 1943 Oistrakh suggested that it would be equally effective if transcribed for violin, and helped the composer revise the solo part. Originally, Prokofiev had been attracted by the flute's gentle, pastoral qualities, and had set out to write something ‘in delicate, fluid, classical style’, but even in a generally light work he couldn’t resist spiky and abrasive moments. These tougher and sometimes ambiguous features are, if anything, emphasised when performed on the violin, and Prokofiev's mixture of abrasive toughness and warm lyricism is also evident in the closing extracts from Romeo and Juliet, transcribed for violin and piano. Often described as a violinist of 'the Golden Russian School', Vadim Gluzman has previously released 11 discs on BIS, including the concertos by Tchaikovsky, Bruch and Korngold. But his discography also includes acclaimed chamber recordings with Angela Yoffe, for instance of Shostakovich’s Violin Sonata; a performance which the reviewer in BBC Music Magazine compared to that of Oistrakh and Richter, adding ‘Gluzman and Yoffe infuse the music with an expressive glow that transcends its innate austerity’.