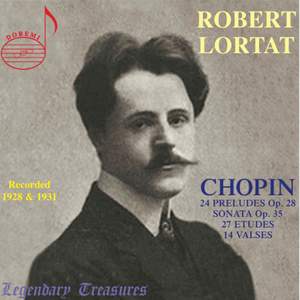 Contains all the known recordings made by the legendary French pianist Robert Lortat (1885-1938).

Lortat studied at the Paris Conservatoire with Louis Diémer (1843-1919} who is considered the father of the modern French piano school and who was the teacher of Alfred Cortot and Robert Casadesus. Diémer G&T recording of Chopin's Nocturne Op. 27 No. 2 made in 1904 is one of the earliest ever recording of Chopin.

He was conscripted to the French army during the First World War and was a casualty of a poison gas attack causing chronic ill-health thereafter. His concerts activity was curtailed, but he continued mainly as a teacher.

His Chopin recordings (which are highly sought after by record collectors), being among the earliest such projects ever made, reveal a consummate, distinctive musical personality with authoritative style and fluent, well-controlled technique.