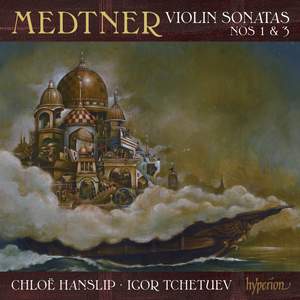 Chloe Hanslip and Igor Tchetuev certainly have the measure of these voluble and passionate yet always disciplined works, turning in performances of the first rank. The bubbling rhythmic liveliness... — BBC Music Magazine, October 2013, More…

The great composer of piano music Nikolai Medtner also wrote three violin sonatas (and other works for the instrument), two of which are recorded here.

The ‘Sonata Epica’ is, as its title suggests, one of the most ambitious and colossal works in the repertoire, and without doubt one of the most important violin sonatas of the twentieth century. It draws deeply on Medtner’s Russian heritage, with intimations of orthodox chant and folk dances. Its continual syncopations show why Medtner was fleetingly regarded as one of Russia’s most progressive composers during the first decade of the twentieth century, yet also contrast with an essentially conservative harmonic idiom. The Sonata No 1 is more understated and reminiscent of Fauré.

Chloë Hanslip has proved herself an eloquent performer of the lesser-known Romantic violin repertoire, displaying rare commitment and resonant vitality.

Chloe Hanslip and Igor Tchetuev certainly have the measure of these voluble and passionate yet always disciplined works, turning in performances of the first rank. The bubbling rhythmic liveliness of Hanslip's playing in the fast movements never compromises beauty of tone...this is a very competitive new recordings of both [works].

Hanslip and Tchetuev are impressive as interpreters: his fine touch and beautifully balanced chordal playing is matched by her lovely tone and phrasing - her singing legato lines are an especial delight.