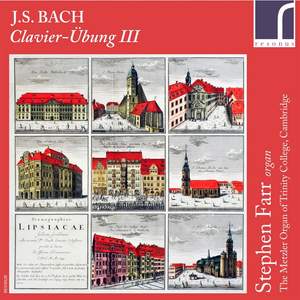 one can simply relax and enjoy Farr's rock-steady rhythmic playing, crisp articulation and commanding overview. His approach is refreshingly unfussy and quirk-free, and he draws on an unfailingly... — Gramophone Magazine, October 2013 More…

The internationally acclaimed organist Stephen Farr presents his first J.S. Bach recording with the virtuosic Clavier-Übung III. Containing some of Bach's most stunning work, this collection demonstrates the composer at the height of his powers in composing for the organ and was one of the few works that Bach had published during his lifetime.

Recorded on the Metzler organ of Trinity College, Cambridge, this album follows Farr's contemporary organ recital on the same instrument released on Resonus Classics in 2012 - Jacquet's Ghost (RES10111). Clavier-Übung III is performed here in its entirety, complete with the four 'Duetti'.

This recording is the first volume in a projected complete recording of the organ works of J.S. Bach by Stephen Farr.

one can simply relax and enjoy Farr's rock-steady rhythmic playing, crisp articulation and commanding overview. His approach is refreshingly unfussy and quirk-free, and he draws on an unfailingly interesting palette of tonal colours...In a strong field this performance must be in the top three.

There are some very fine moments here. To hear such a delightful Sptizflote picking its way delicately through the third Duetto is a real treat, and hearing a gentle Gedackt delicately singing away all on its own in the second of the preludes on 'Kyrie, Gott heiliger Geist' is utterly enchanting.