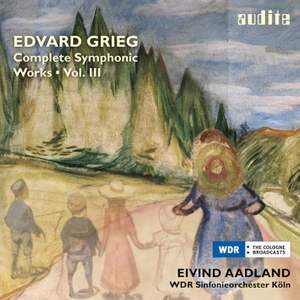 Aadland has the advantage of truly first-class orchestral playing: the Cologne WDR Sinfonieorchester is a fine orchestra indeed, and its account of the Lyric Suite is notable for its excellence... — International Record Review, September 2013 More…

IV. Troldtog (March of the Dwarfs)

The WDR Sinfonieorchester and the Norwegian conductor Eivind Aadland continue their survey of Edvard Grieg’s orchestral works with this selection from the composer’s orchestral repertoire which he liked to conduct himself across Europe. Not all of Grieg’s orchestral works were originally conceived as such. As he became increasingly famous as a composer and conductor, the Norwegian also arranged piano works which later became popular above all in their orchestral versions. Amongst these is the suite from his 'Lyric Pieces', Op. 54, to which belongs another single piece, the almost impressionist study, 'Bell Ringing'. The 'Old Norwegian Melody with Variations', Op. 51, originally a set of variations for two pianos, was also skilfully provided with orchestral colours, at the same time increasing the musical drama. The Concert Overture 'In Autumn', completed by the 22-year-old composer during a stay in Rome, creates an exception: it was apparently conceived from the outset as an orchestral work, but as initially published as a piano piece and orchestrated at a later stage. Amongst all these innovative works, the only 'original' ones are the three pieces from the incidental music to Bjørnstjerne Bjørnson’s Norwegian play 'Sigurd Jorsalfar', of which the "Homage March" remains an obligatory item to the present day at coronations and festivities of the high nobility. Eivind Aadland was chief conductor and artistic director of the Trondheim Symphony Orchestra from 2003 until 2010 and has also worked with many other Scandinavian, European and international orchestras. Aadland initially studied the violin with Yehudi Menuhin. From 1981 until 1989 he was concert master of the Bergen Philharmonic and from 1987 until 1997 music director of the European Union Chamber Orchestra. He subsequently devoted himself fully to his conducting career and studied with Jorma Panula.

Aadland has the advantage of truly first-class orchestral playing: the Cologne WDR Sinfonieorchester is a fine orchestra indeed, and its account of the Lyric Suite is notable for its excellence and the apt tempo Aadland adopts

None of these is a major work, it's fair to say, but all have the kind of easy fluency and melodic freshness that characterise so much of Grieg's finest music, and the WDR orchestra's performances under Eivind Aadland have exactly the light touch they need.