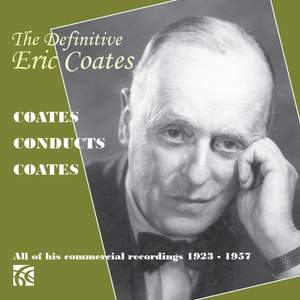 All of his commercially released recordings 1923-1957

The 78 record transfers have been excellently mastered with complete removal of all 'shellac' track noise and clicks, yet with no loss of treble frequencies. — MusicWeb International, 30th September 2013

Coates, E: With a Song in my Heart: Symphonic Rhapsody after Richard Rodgers (Recorded 1930)

Coates, E: The Jester at the Wedding

Coates, E: Songs of Loyalty (The Prayer Within Our Hearts) (Recorded 1935)

Coates, E: Valse from The Phantasy "The Three Bears" (Recorded 1949)

Coates, E: From the Counrtyside Suite

Restoration and Remastering by Alan Bunting

I had been contemplating a ‘Definitive’ Eric Coates collection for some time but it was the discovery of Michael Payne’s Ph.D. Thesis for Durham University “The Man Who Writes The Tunes” that encouraged me to start serious work on it. Michael has since turned this thesis into the definitive book on Coates, “The Life And Music Of Eric Coates” published by Ashgate in 2012, and I was delighted when he agreed to write the booklet notes.

The track order: My original concept was to present the recordings in strict chronological order but it became apparent that, although this would be ideal for those wishing to analyse and study Coates’ work, some pieces would appear twice on the same CD which would be frustrating for the normal listener. The approach therefore has been to make each disc a varied and enjoyable selection of his work.

The acoustic recordings, which I imagine most people will not listen to very often, are grouped at the end of CD 6. Opinions differ widely on how restoration and remastering of acoustic recordings should be done. My aim is to reveal as much detail as possible, some of which would not have been heard when played on a contemporary gramophone. This probably will not satisfy the purists but is, I think, the best approach for a project such as this. Although this collection claims to include every commercial recording Coates made, two are missing. One source says that Covent Garden and Westminster, from The London Suite, recorded in 1933 and issued on Columbia DX 470 (Matrix number CAX 6748-1) were re-recorded in May 1947 with a new matrix number (CAX 6748-2) and issued the following month, paired with the original pressing of Knightsbridge using the same catalogue number. Careful listening and comparison of the wave forms shows that they are virtually identical. It is very unlikely that such similarities could occur in recordings made 14 years apart and only the first is included in this collection.

My sincere thanks are due to collector friends in Australia, Britain, America and Canada without whose generous help this collection would not have been possible.

The 78 record transfers have been excellently mastered with complete removal of all 'shellac' track noise and clicks, yet with no loss of treble frequencies.