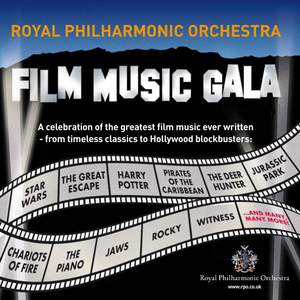 Offer, Film Music Gala: A Celebration of the Greatest Film Music Ever Written

Romeo and Juliet: The Balcony Scene (arr. P. Bateman for piano and orchestra)

Star Wars Episode II, Attack of the Clones: Across the Stars (arr. A. Saunders for orchestra)

Lloyd Webber, A: The Phantom of the Opera: All I Ask of You (arr. D. Arnold)

The Phantom of the Opera: All I Ask of You (arr. D. Arnold for orchestra)

Far From Heaven: Suite (arr. Elmer and Emile Bernstein for piano and orchestra)

Girl with a Pearl Earring (arr. A. Desplat)

Girl with a Pearl Earring: Griet's Theme (arr. A. Desplat for orchestra)

Williams, John: Indiana Jones and the Temple of Doom

The Truth About Love: Suite (arr. D. Wiseman for orchestra)

Badelt: Pirates of the Caribbean: The Curse of the Black Pearl (arr. C. Tin)

Pirates of the Caribbean: The Curse of the Black Pearl: Main Themes (arr. C. Tin for orchestra)

Stoned: Out of Control (arr. N. Dodd for orchestra)

War of the Worlds: Suite (arr. C. Tin for orchestra)

Pride and Prejudice: Mrs. Darcy (arr. B. Wallfisch for piano and orchestra)

4 Weddings and a Funeral: Love Scene

Doyle, P: Harry Potter and the Goblet of Fire

Harry Potter and the Goblet of Fire: Harry in Winter

Jarre, M: The Night of the Generals (arr. N. Raine)

The Night of the Generals: Genral Tanz - On the Terrace at Versailles (arr. N. Raine for orchestra)

Munich: A Prayer for Peace (arr. N. Raine for orchestra)

Enjoy a tribute to the magnificent world of film music with this triple CD box set - over three and a half hours of popular Hollywood themes performed by the world-renowned Royal Philharmonic Orchestra.

Uniquely, some of the tracks on this box set were actually conducted on these recordings by the leading British composers who wrote the film scores – Grammy award winner David Arnold (The Stepford Wives and Stoned), Novello award winner Nigel Hess (Ladies In Lavender) and Debbie Wiseman (The Truth About Love and Arsène Lupin). Other well-loved composers whose music also features on these discs include: John Barry, John Williams, Michael Nyman, Burt Bacharach, Elmer Bernstein, Maurice Jarre, Nino Rota, Hans Zimmer, Dario Marianelli and Vangelis, among others.