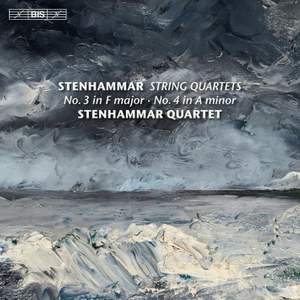 this new recording is more romantic and rhapsodic...This is music not just for Nordic specialists and should be investigated. — Gramophone Magazine, November 2013 More…

If there is one Swedish composer in the early 20th century who in some way can compare with Sibelius and Nielsen, it is Wilhelm Stenhammar.

The seven quartets (of which one, in F minor, was withdrawn by the composer soon after its first performance) were written over the space of 22 years, and mirror Stenhammar’s development, from full-blown Romanticism to a more sparse and formally concentrated idiom.

This is the Stenhammar Quartet’s debut recording for BIS, but they present the first disc in a trilogy which will include the six quartets published during the composer’s lifetime, as well as the F minor quartet – for the first time on disc.

this new recording is more romantic and rhapsodic...This is music not just for Nordic specialists and should be investigated.

The performances, bristling with tension and lyrical beauty, are exceptional.