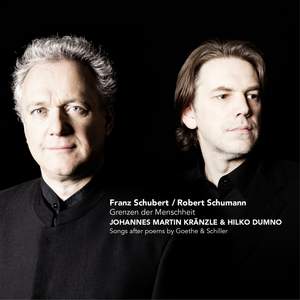 ‘Grenzen der Monschheit’ takes its title from the song by Franz Schubert which is performed here by the award-winning German baritone Johannes Martin Kränzle and the pianist Hilko Dumno. The song itself is a setting of a text by Goethe, and the whole album is devoted to lieder by Schubert and Robert Schumann that set the words of Goethe and fellow great German writer Friedrich Schiller.

Born in Augsburg, Germany, in 1962, the baritone Johannes Martin Kränzle has been member of the Frankfurt Opera since 1998, and performed at many of the great opera venues of the world, including La Scala in Milan, and the San Francisco Opera. He has also made several appearances at leading international festivals including Salzburg and Glyndebourne. His wide repertoire covers leading roles in the major operas of Mozart, Rossini, Wagner, and Verdi. Martin Kränzle has received various prizes at singing contests in Berlin, Vercelli (Viotti), Hanover, Perpignan, Paris (Placido Domingo), and the Primo Grande Premio in Rio de Janeiro in 1991. He was also chosen as ‘Singer of the Year’ 2011 by the leading opera magazine Opernwelt, and awarded the ‘Kölner Opernpreis’ 2012. He is currently appearing as Alberich in Wagner’s Ring cycle at the Staatsoper Berlin, La Scala, Milan and the BBC Proms with conductor Daniel Barenboim.