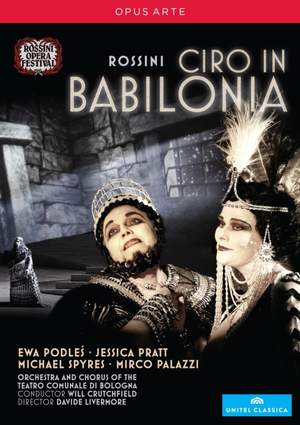 Livermore initially opts for pure comedy in staging it as a 1920s silent movie...Never has opera seria been such a hoot...Podles makes for a feisty Ciro, her black treacle contralto imperious,... — International Record Review, September 2013 More…

The Biblical story of Belshazzar’s hubristic arrogance set against the valour of the young warrrior-leader Cyrus provided the 20-year-old Rossini with a dramatic story with West-Eastern resonances which still speak to us today. For the title role of Cyrus, Rossini wrote what would be his longest-ever contralto role, to which the great Rossini singer Ewa Podles is both naturally attracted and ideally suited. She is partnered by two young American stars of Rossini singing, Jessica Pratt and Michael Spyres, and a conductor-scholar, Will Crutchfield, of immense experience and sympathy.

World-premiere filming of this Rossini masterpiece.

Rossini was only 20 when he wrote Ciro in Babilonia.

From the Rossini Festival at Pesaro, Italy – the only festival devoted exclusively to the works of the composer.

Livermore initially opts for pure comedy in staging it as a 1920s silent movie...Never has opera seria been such a hoot...Podles makes for a feisty Ciro, her black treacle contralto imperious, even if her coloratura is now a little effortful...Pratt's Amira is excellent...The audience's matinee idol here, though, is Michael Spyres...a bari-tenor if ever there was one!

There are few better exponents of this genre of Rossini trouser roles, and this one in particular, than Ewa Podles. Formidable in her vocal range, she makes more than a cardboard character out of the part with outstanding acting and singing

The Cecil B. Demille silent movie treatment works wittily, with the singers striking poses with panache and Gianluca Falaschi’s black and white costumes surely amongst the most stunning ever seen on stage...Ewa Podles’s Ciro goes where fewer mezzos have been before, usually lower, and Jessica Pratt’s Amira soars in alt.