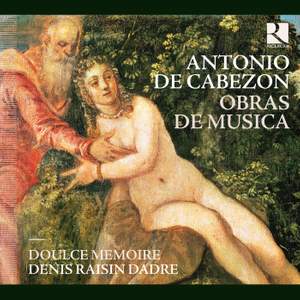 intelligently programmed and imaginative music-making that not only advocates Cabezon's merits but also recreates the improvisatory spirit of his probably practices - and, most importantly, proffers... — Gramophone Magazine, October 2013 More…

Hernando de Cabezón, the son of the renowned organist Antonio de Cabezón, published a vast anthology of his father’s compositions under the title of Obras de Musica para tecla, arpa y vihuela. For keyboard and plucked string instruments, these pieces include works in every genre of the period, both sacred and secular, and perfectly written for four, five or six parts. In accordance with a performance practice common from the time of the Renaissance onwards, the musicians of Doulce Mémoire divide the works’ polyphonic lines between the instruments of the ensemble.

They decided to choose only secular works, these being ornamented pieces based on various songs and madrigals, of which Suzanne un jour and Anchor che col partire were amongst the most popular of the Renaissance period. Each part of these works has its own individual expression; our realisation of them also benefits from even larger powers of expression and the virtuoso writing that is tailored to each separate part. The original works on which the ornamented versions are based are also recorded here, sung by Clara Coutouly with a delightful accompaniment of plucked string instruments.

intelligently programmed and imaginative music-making that not only advocates Cabezon's merits but also recreates the improvisatory spirit of his probably practices - and, most importantly, proffers a veritable feast for the ears.