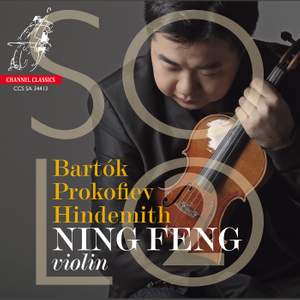 His performances of all [the works] unveil his artistry and musical thought in a way more redolent of his live performance persona than the evidence we have hitherto had on disc, exposing him... — Gramophone Magazine, Awards Issue 2013 More…

BELA BARTOK composed his Sonata for violin solo (1944) after emigrating from Hungary to the USA on the outbreak of World War II. Political developments in Hungary and surrounding dictatorships became such an unbearable torment, that after long hesitation he said farewell to his fatherland. Before the October Revolution of 1918, SERGEY PROKOFIEV had been the enfant terrible of Russian music. His pointed, granite-like touch and - for that time - petrifying harmonies invariably caused violent controversies. In 1933, after a voluntary exile of fifteen years, homesickness brought him back to his fatherland.

PAUL HINDEMITH's name was established as a prominent contemporary composer, which led to his appointment in 1927 as composition teacher at the Berlin Hochschule für Musik. However, the rise to power of the Nazis brought an end to Hindemith's activities and performances of his music. His two 'crimes' were the composition of 'degenerate' music and his association with Jews. Via Switzerland he went into exile in the USA.

His performances of all [the works] unveil his artistry and musical thought in a way more redolent of his live performance persona than the evidence we have hitherto had on disc, exposing him as the thoughtful - as well as astonishingly accurate and nimble - musician he is.

In purely technical terms this is a CD of quite stunning violin playing. Every aspect of Ning Feng’s playing seems to be under extraordinary control...the level of musical insight does not match the technical brilliance. I feel almost ungrateful and churlish asking for more in the presence of such skill.