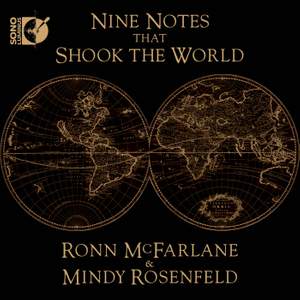 Oswald, James: Airs for the Summer: The Thistle

Oswald, James: Airs for the Winter: The Laurel

Macleod, W: Sitting in the Stern of a Boat

Grammy-nominated lutenist Ronn McFarlane is joined by flutist Mindy Rosenfeld to create the latest release from Sono Luminus, 'Nine Notes that Shook the World'. This release includes a surround-sound Blu-ray disc and a standard CD.

Explained by Mindy Rosenfeld, “This recording is a gathering of some of our favorites, a musical feast. A wide cross section of styles, both ‘folk and fyne’, evocative and expressive of the variety and intensity of human feelings, from sparky, joyful fun to deeper meditative inner reflection, these timeless tunes from past centuries still touch us in ways words cannot, stirring our life energy.”

Ronn McFarlane strives to bring the lute – the most popular instrument of the Renaissance – into today’s musical mainstream and make it accessible to a wider audience. Born in West Virginia, Ronn spent his early years in Maryland. At thirteen, upon hearing “Wipeout” by the Surfaris, he fell wildly in love with music and taught himself to play on a “cranky sixteen-dollar steel-string guitar.” Ronn kept at it, playing blues and rock music on the electric guitar while studying classical guitar. Recently, Ronn has been engaged in composing new music for the lute, building on the tradition of the lutenist/composers of past centuries. His original compositions are the focus of his solo CD, Indigo Road (DSL90701), which received a Grammy Award Nomination for Best Classical Crossover Album in 2009.

Fluent in the music of several eras, Mindy Rosenfeld is a founding member of the highly respected Baltimore Consort, with whom she tours extensively, and since 1989, of San Francisco’s Philharmonia Baroque Orchestra (“the nation’s premier early music ensemble” - The New York Times), where she has performed under director Nicholas McGegan and guest conductors William Christie, Jordi Savall, Gustav Leonhardt, Andrew Parrott, Andrew Manze, Bernard Labadie and Trevor Pinnock. As a colleague of Ronn McFarlane, she has performed in the trio 'Gut, Wind and Wire', and in the band Ayreheart. The mother of five boys, with a BM in Flute Performance from the Peabody Conservatory (Baltimore) and an MM in Modern and Baroque Flute Performance from San Francisco Conservatory, Mindy divides her time between performing, touring, teaching, dancing, her family, and their garden.