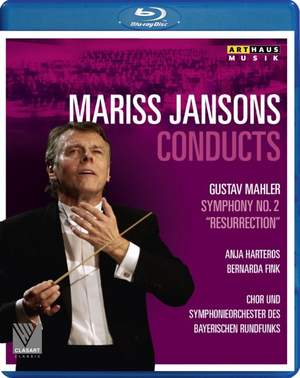 I hadn't taken on board quite how expressive a master Jansons can be: the face and above all the eyes change in an instant through absorption in the Resurrection's drama...These are superlative... — BBC Music Magazine, September 2013, 4 out of 5 stars More…

Gustav Mahler’s gigantic Symphony No. 2 in C minor usually fi lls out a concert on its own. But in this recording with the Symphonieorchester des Bayerischen Rundfunks (Bavarian Radio Symphony Orchestra) under its principal conductor Mariss Jansons, the work is introduced by an exquisite – and fi tting – choral work: A contemporary (1982) 16-voice arrangement of a song by Mahler, Ich bin der Welt abhanden gekommen, based on a poem by Friedrich Rückert and originally composed for voice and orchestra in 1901 – performed here by the superb Chor des Bayerischen Rundfunks (Bavarian Radio Choir).

The nickname “Resurrection” for Mahler’s Second Symphony is derived from the closing chorus of the last movement, in which Mahler set to music verses from Klopstock’s “Messias”. Although the symphony is a challenge to perform, due to the length of the work as well as the exceptionally large musical scoring, it has become part of the standard repertoire. The Second Symphony is a central work in Mahler’s oeuvre, a work whose Munich performance of 1900 brought him the long hoped-for recognition as composer.

I hadn't taken on board quite how expressive a master Jansons can be: the face and above all the eyes change in an instant through absorption in the Resurrection's drama...These are superlative players, too, responsive to Janson's subtlest rubato...[the symphony] confirms Jansons as one of the world's top five living conductors.

Throughout, the video director has done a superb job...The voices of Anja Harteros and Bernarda Fink together with the magnificent playing and singing of the Bavarian orchestra and chorus under Mariss Jansons is remarkable right from climaxes of sonic proportions to the high strings playing the softest pianissimo. Under their chief conductor I couldn’t currently name a finer orchestra. Bravo!