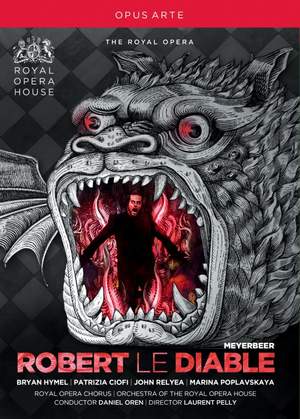 A grand opera that dominated the stages of Europe for most of the 19th century, Robert le diable is a masterpiece.

Director Laurent Pelly breathes new life into Giacomo Meyerbeer’s great spectacle and audaciously entertaining moral fable, in this colourful new staging for The Royal Opera. The wonderful score includes brilliant arias, dramatic ensembles, rousing choruses and a ballet of ghostly nuns, and with the wavering hero of the title sung by Bryan Hymel, acclaimed for his role as Énée in Les Troyens for The Royal Opera and the Metropolitan Opera, this is an unmissable experience.

Premiered in 1831, it was one of the first grand operas staged at the Paris Opéra.

Meyerbeer’s European fame was initiated with “Robert” – performed 470 times in Paris alone by the time of the composer’s death in 1864.

“It is a masterpiece...Meyerbeer has made himself immortal” (Frédéric Chopin)

Extra features: ‘The legacy of Robert le diable, and a cast gallery.

Meyerbeer's vocal writing demands virtuoso singing, and receives that here. Bryan Hymel hurls himself unstintingly at the title role, impossible high notes and all. Marina Poplavskaya suggests the spiritual inspiration of Alice, while Patrizia Ciofi is a worthwhile if mature Isabelle.

Hymel deals skilfully with the title-role, reaching up to the high Cs, even at one point a D, with impressive ease. His nemesis, the devilish Bertram, is firmly sung by bass John Relyea...Ciofi rises to some heartfelt singing in Isabelle's big solo...Oren gets excellent contributions from the orchestra and chorus

[Ciofi] makes a vital impression with her fluent coloratura, gentle cantilena, good legato, intelligent phrasing and pleasing tone. With her timbre contrasting with Poplavskaya's fuller sound, Ciofi is a huge plus mark...[Hymel] makes a pretty impressive job as he takes everything in his vocal stride.

[Hymel's] voice has a burnished, heroic quality above the stave that sounds very good...Ciofi does a brilliant job as Isabelle...but the chief hero is John Relyea’s Bertram...The cavernous depths of his voice sound bottomless...If you want Robert le Diable then this is the version to get