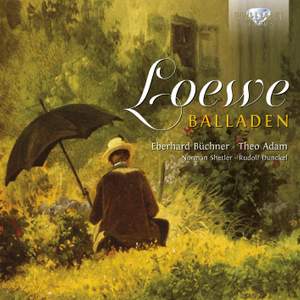 Carl Loewe was born in Löbejün, studied in Halle, toured through Germany in his mid-20s and then secured an appointment as professor and Kantor at the Gymnasium and seminary in Stettin (formerly in Prussia, now in Poland), where he remained for the rest of his life. A contemporary of Schubert, he was a central figure in Stettin's musical life, and was a prolific composer of songs and oratorio to cater for the increasing musical appetite of the late-19th-century German bourgeoisie.

Loewe is today remembered for his treatment of the ballad, a relatively new genre at that time which took the form of a lengthy story comprising many verses, characters and dramatic events. Country life, olden or idealised times, love and the passing of time are often the subject matter for his works, which are set to a variety of then-contemporary poets ranging from classical masters Rückert and Schiller to more forward-looking ones such as Chamisso - while Prinz Eugen (1844) recounts the victory of Prince Eugen of Savoy during the Austro-Turkish War of 1716-18, for instance, Süßes Begräbnis describes the final resting place of a shepherdess (1837).

Also included on the release is Loewe's intimate setting of Goethe's Erlkönig, a direct contrast to Schubert's infamous and much more extrovert rendition of the text, composed just one year earlier.

Performing these often over-looked works are the tenor and bass singers Eberhard Büchner and Theo Adam, accompanied by Norman Shetler and Rudolf Dunckel respectively. The two duos cover all manner of moods in what are highly atmospheric pieces, and in doing so offer a strong case for why Loewe - nicknamed the 'Schubert of North Germany' in his day - deserves to be better known.