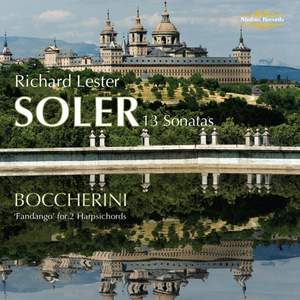 Describing the performances as masterful doesn't do them justice. Only by fully inhabiting each sonata could Lester present every detail of their individual character with such confident ease. — International Record Review, September 2013 More…

The harpsichord music of Antonio Soler is to a great extent overshadowed by the keyboard works of his near contemporary Domenico Scarlatti, music master to Queen Maria Barbara of Spain. Soler though, rightly claims a prominent position amongst those few select composers who became beacons of the Classical Enlightenment and whose music possessed elements of genius. At the age of twenty-three Soler took Holy Orders, entering the Escorial as a Hieronymite monk in the Order of Saint Jerome where he remained in relative confinement for the rest of his life. His existence at the Escorial is well documented by a colleague who wrote an extremely detailed obituary notice, describing a man who loved his cell and was always there except for duty. Whilst at the Escorial, Soler studied with José de Nebra and Scarlatti. Soler’s output of around 200 harpsichord sonatas were written for the Infante don Gabriel, whom Soler taught from around 1765. The sonatas on this CD can be pigeonholed into three categories: the dance (sonatas R21, R118, R43 & R92d). Those which are slower and more vocal in nature (R4 & R110) with a hint of the melismatic expression found in cante hondo: a pure form of Andalucian folk music. And those which lean towards the new ‘galant’ style (R56 & M27). There are also frequent echoes of the guitar punteado and rasgueado styles, R86 & R43 which are also related to the dance.

Luigi Boccherini was born in Lucca, Italy in 1743 and was renowned as a composer and ‘cellist. In 1761, Boccherini went to live in Madrid where he was appointed music master to the Infante Luis Antonio, and he would certainly have met Soler. This version of Boccherini’s fandango, from the last movement of Quintet No 4 in D major, is Richard Lester’s own arrangement for two harpsichords.

Describing the performances as masterful doesn't do them justice. Only by fully inhabiting each sonata could Lester present every detail of their individual character with such confident ease.

there are few if any better advocates for these pieces than Lester, a composer's musician who plays without cliché or affectation, his open-toned scholarliness striking just the right course between precision and warmth, pizzazz and coherence, devil and monk.