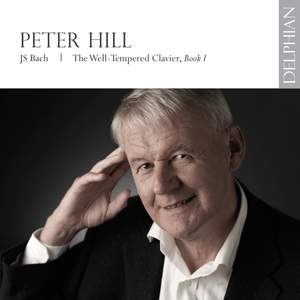 Hill establishes his voice from the outset with fluid, velvet-toned playing and a predominantly introspective, rather than showy approach...In short, these are exquisitely poetic and, above all,... — BBC Music Magazine, September 2013, 5 out of 5 stars More…

Prelude I in C Major

Fugue I in C Major

Prelude XIX in A Major

Fugue XIX in A Major

Prelude XX in A Minor

Fugue XX in A Minor

Prelude XXII in B Flat Minor

Prelude XXIII in B Major

Fugue XXIII in B Major

Prelude XXIV in B Minor

Fugue XXIV in B Minor

Peter Hill’s recording of Bach’s 'Well-Tempered Clavier', Book II wowed critics across the board in January 2012, prompting The Guardian to write: "With luck this is the first in a series of Bach recordings from Hill, and let’s hope Book I of the '48' follows soon."

One of the leading British pianists of his generation, Peter Hill is known for his performances and recordings of 20th-century and contemporary music as well as the classical repertoire. His complete cycles of Messiaen and of Berg, Schoenberg and Webern have received superlative acclaim. The Messiaen was described as "one of the most impressive solo recording projects of recent years", New York Times, and won Messiaen’s endorsement:"Beautiful technique, a true poet: I am a passionate admirer of Peter Hill’s playing". Both sets feature in the book '1001 Classical Recordings You Must Hear Before You Die'.

Hill establishes his voice from the outset with fluid, velvet-toned playing and a predominantly introspective, rather than showy approach...In short, these are exquisitely poetic and, above all, painterly accounts.

Hills shows a particular sensitivity to the kind of touch required to play this music on the harpsichord...His restraint and intellectual approach throughout renders the performance wholly satisfying...Thank goodness we have Hill’s full account now, however, for it will provide a fantastic resource to delve into as well as many hours of enjoyable listening

Hill plays Bach as if in one-to-one communion with the composer, while at the same time sharing it with you, the listener...It confides and reveals the genius of the composer rather than the brilliant musicianship of the performer, while at the same time keeping the notes singing and alive, the rhythms sprightly and filled with their essential line-fuelled but oft-restrained Baroque energy.

Bach’s music tests the pianist in many ways, but one of the most telling is that it asks how much or how little the performer should exert ego. Hill... gets the balance just about right in an intimate account of the first book of The Well-Tempered Clavier that nevertheless oozes authority.

what emerges so clearly again in Hill's wonderfully thoughtful, lucid performances is the sheer range of these pieces, the myriad ways in which Bach varied the preludes to incorporate so many distinctive 18th-century musical forms, from dances to studies, arias to improvisations. Hill characterises every one of them vividly and individually