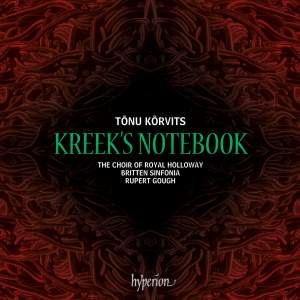 Spiritual Songs from the Baltic States

Kõrvits: The night is darkening round me

The Choir of Royal Holloway have proved themselves as inspirational performers of contemporary Baltic music through their previous recordings.

The main work on this fascinating album is based on Estonian folk hymns, an unusual variant of folk melodies, collected in the early twentieth century for the first time by Cyrillus Kreek, who was the Estonian equivalent of Bartók or Grainger. Most of these religious folk songs were originally eighteenth-century Lutheran hymns which have been passed across generations and embellished with elements of secular folk-singing. During the Soviet regime, the singing of these religious songs was forbidden and this cultural genre was all but forgotten. By the end of the twentieth century fresh light could be shone on these folk collections, and Tõnu Kõrvits (born 1969) was particularly struck by the fresh possibilities and newly discovered meanings of folk hymns. In writing Kreek’s Notebook Kõrvits pays homage to Cyrillus Kreek while presenting a contemporary view of folk hymns. Although there is a dramatic unity to this eight-movement work, there is much diversity in timbre and scoring. The effect is improvisatory in the creative ornamentation of the vocal lines, and suffused with dreamy textures that bring to mind the great tradition of Eastern European choral writing.

More from the ever-renewing, never emptying, storehouse of Baltic song...this Baltic compilation is given gently sympathetic performances by the student singers of Royal Holloway College and the Britten Sinfonia under Rupert Gough.

Their championship of the music of the Baltic countries is a true feather in their cap, as this proves once again...Performances and recording are outstanding.

This disc proclaims the excellence of British choral singing and the remarkable quality of contemporary choral music from the Baltic countries.

This is a programme packed with interesting music. Yet again Hyperion’s enterprise in issuing a disc like this shows us what fine choral music is to be heard in the Baltic States. The performances are out of the top drawer. The quality of the singing is consistently excellent