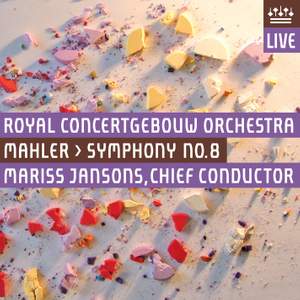 Jansons' line up of Wagnerian soloists for this live Concertgebouw Mahler spectacular is possibly the most impressive since Georg Solti's classic 1971 recording...If this still doesn't rise quite... — BBC Music Magazine, October 2013, 4 out of 5 stars More…

Part I - I. Veni, Creator Spiritus

"Try to imagine the whole universe beginning to ring and resound. There are no more human voices, only planets and suns revolving in their orbits," wrote Gustav Mahler to his friend, Willem Mengelberg, on 18 August 1906. The day before, he had completed the sketches of the Eighth Symphony in little more than three weeks, and that after a very hectic season.

The legendary relationship between Gustav Mahler, the Royal Concertgebouw Orchestra and Willem Mengelberg has established a firm tradition of playing Mahler in Amsterdam. During the 1960s the orchestra and Bernard Haitink started recording a Mahler discography that still remains one of the cornerstones of any Mahlerian's collection. Ricccardo Chailly's tenure as chief conductor yielded another brilliant Mahler cycle and now Mariss Jansons is steadily building his tribute to the composer.

Recorded during the same Mahler cycle as the recently released Symphonies Nos. 2 and 3 – part of the full Mahler cycle that the orchestra performed in the 2009-2011 seasons to celebrate the composer's 150th birthday and 100th anniversary of his death - Mariss Jansons's interpretation of the Eight Symphony is one more jewel in the crown of the Royal Concertgebouw Orchestra; with a star-studded cast and excellent choral forces, this 'Symphony of a Thousand' left a lasting impression on the audience.

Jansons' line up of Wagnerian soloists for this live Concertgebouw Mahler spectacular is possibly the most impressive since Georg Solti's classic 1971 recording...If this still doesn't rise quite to the top of my list of recorded Mahler Eights, it's partly because Jansons doesn't 'do' impetuous from the outset as Mahler asks.

Jansons keeps the music moving and gives himself something to pull back from in the biggest tuttis...And he has a shining Christine Brewer as his first soprano popping those top Bs and Cs above the stave...up there among the select front-runners.

Jansons sets off Mahler’s cosmic clockwork with all-encompassing vision and jewelled precision. Contrapuntal textures never flag or become garrulous in density or over-insistence. The few passages where the music draws breath are shrewdly punctuated as moments of re-charge...a compelling course is steered towards a torrential closing passage.

The performance has absolutely no weak links. The choral singing, so crucial in this work, is highly disciplined and excellent...The playing of the Royal Concertgebouw Orchestra is superb throughout...the performance is superbly controlled and though Jansons gives the music its head he keeps a very firm grip on things and also displays tremendous attention to detail

It immediately takes the lead among interpretations of this phenomenal work...a reading of the score that is both thrilling and telling in its emotional finesse and sincerity...With the Royal Concertgebouw on supreme form, Jansons unequivocally delivers a performance of cosmic impact.