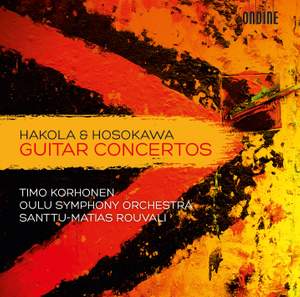 The intensity of Hakola's response to the music compels attention through every bar of the [central] movement...The Oulu Symphony Orchestra are on fine form throughout and Santtu-Matias Rouvali... — Gramophone Magazine, Awards Issue 2013 More…

Ondine proudly presents world première recordings of two Guitar Concertos: one by Kimmo Hakola and the other by Toshio Hosokawa. These are performed by Timo Korhonen – the guitarist for whom the concertos were written – and the Oulu Symphony Orchestra conducted by Santtu-Matias Rouvali.

Toshio Hosokawa takes a more meditative approach as he searches for symbolic universal harmony in his music.

Timo Korhonen is one of the world’s most acclaimed guitarists. He has premiered over 40 new works during his career, and has made several critically acclaimed and award-winning recordings.

Santtu-Matias Rouvali has recently made a number of significant international debuts. He participated in the Dudamel Fellowship Programme in 2011/12, and will start his tenure as Chief Conductor and Artistic Director of the Tampere Philharmonic Orchestra in September 2013. He is also the Principal Guest Conductor of the Copenhagen Philharmonic Orchestra. This CD is his debut disc.

The Oulu Symphony Orchestra has developed considerably over the last few years under Anna-Maria Helsing. Johannes Gustavsson will continue this development from this autumn when he takes over as Chief Conductor.

The intensity of Hakola's response to the music compels attention through every bar of the [central] movement...The Oulu Symphony Orchestra are on fine form throughout and Santtu-Matias Rouvali directs with assurance.

The Oulu Symphony Orchestra are based just outside the Arctic Circle and consequently not so well known further south, but it ought to be - their performances here are terrific.