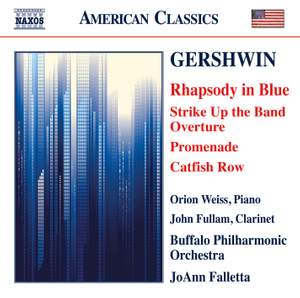 The orchestral contribution is lively and idiomatic, with jazzy clarinet and trumpet. The solo playing is clean and clear, but I would also describe it as thoughtful and careful...Recommendable... — BBC Music Magazine, September 2013, 3 out of 5 stars More…

George Gershwin fired up the New York music scene with his mélange of alluring tunes and refinement of the jazz vibe. His Strike up the Band Overture opened a flashy Broadway hit and, inspired by a train ride, the composer heard his masterpiece Rhapsody in Blue as a “musical kaleidoscope of America”. Promenade was reconstructed from a 1937 film score, and Catfish Row was Gershwin’s concert suite from the opera Porgy and Bess. Acclaimed as a “bold, gutsy performance with plenty of pizzazz” and with “impressive brilliance and depth”, JoAnn Falletta’s previous Gershwin volume can be found on 8559705 or Blu-ray NBD0025.

This release follows JoAnn Falletta and the Buffalo Philharmonic’s acclaimed recording of Gershwin’s Piano Concerto, which was a Grammy® nominee and described by Gramophone as having “snappy performances in well-balanced, clear recordings”. Soloist Orion Weiss has also frequently been singled out for praise, with MusicWeb International’s critic admiring his “special gift of making you listen to what he has to say.” With cracking performances, a spectacular recording and widespread promotion, we anticipate this title will be one of the hottest releases of this summer.

JoAnn Falletta serves as Music Director of the Buffalo Philharmonic and Virginia Symphony in the United States and Principal Conductor of the Ulster Orchestra in Northern Ireland.

The orchestral contribution is lively and idiomatic, with jazzy clarinet and trumpet. The solo playing is clean and clear, but I would also describe it as thoughtful and careful...Recommendable with some reservations, then.

Weiss veers towards the Romantic piano concerto but is faithful to the score - not always the case these days.