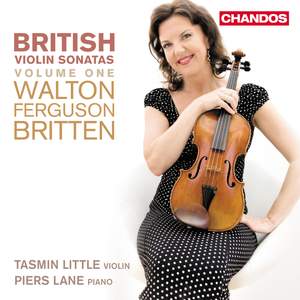 Little's style...[is] happily free of any hint of narcisstic self-regard, so that nothing stands in the way of her forthright and superb communication skills...Little's playing has ceaseless... — BBC Music Magazine, September 2013, 4 out of 5 stars More…

Enjoying a flourishing career that has taken her to every continent and major orchestra around the world, the violinist and exclusive Chandos artist Tasmin Little continues to champion seldom-performed repertoire. This disc marks the beginning of her new survey of British violin sonatas with the pianist Piers Lane.

As a composer, Howard Ferguson had a preoccupation with technical finesse, which meant that he was a slow and meticulous composer. He produced only twenty works before he decided to abandon composition altogether in 1959, as a result of his lack of sympathy with the modernist trends of the day. Ferguson wrote his Violin Sonata No. 2 for the Israeli violinist Yfrah Neaman. The sense of anxiety that is portrayed throughout is highly characteristic of the works by this composer, as is the intensely economical motivic workings.

William Walton wrote his Violin Sonata as a gesture of gratitude to Yehudi Menuhin for having lent him 1000 Swiss Francs to pay for medical treatment for his partner at the time, Alice Wimborne, who had fallen ill while they were in Lucerne. The sonata is unusual in its two-movement format. Both movements are substantial, and this may explain why Walton dropped the two-minute Scherzetto which he originally had sandwiched between them. The Scherzetto was later published separately as one of the Two Pieces for Violin and Piano, the other being a Canzonetta based on a mediaeval troubadour theme. The Two Pieces were dedicated to Vivien Leigh and her husband, Laurence Olivier.

Long before Benjamin Britten became famous as an opera composer, his aptitude for composition was evident in a series of early instrumental works marked by their technical brilliance, few more virtuosic than his Suite, Op. 6. While this is true, Britten himself seemed undecided about the structure of this work, which went through numerous reconsiderations, the last of which he prepared just eight months before his death.

Tasmin Little is an Ambassador for The Prince’s Foundation for Children and the Arts, President of the European String Teachers’ Association, and a Fellow of the Guildhall School of Music and Drama. She has further received Honorary Degrees from the universities of Bradford, Leicester, Hertfordshire, and the City of London. In great demand as a chamber musician, Piers Lane has given sold-out recitals at the Wigmore Hall, London, and the opening recital at the new Melbourne Recital Centre; he has long-standing partnerships with Tasmin Little, the soprano Cheryl Barker, baritone Peter Coleman-Wright, and violist and composer Brett Dean.

Little's style...[is] happily free of any hint of narcisstic self-regard, so that nothing stands in the way of her forthright and superb communication skills...Little's playing has ceaseless and strong support from Lane's accompaniments

This performance is finely paced, with a sense of momentum that allows the listener to appreciate Walton's mastery of large-scale form, and Tasmin Little's full, expressive tone seems ideally suited to the work's sinuous melodies.