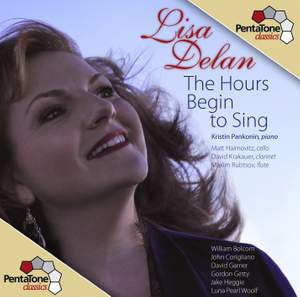 Heggie: From the Book of Nightmares

II. In a Restaurant

IV. Back You Go

No. 3. She Moved Through the Fair

No. 1. Safe in Their Alabaster Chambers

No. 2. There's a Certain Slant of Light

No. 4. Because I Could Not Stop for Death

No. 22. At the Last Lousy Moments of Love

No. 19. Angels Are the Highest Form of Virtue

This album is a follow up to the album ‘ If a Song be Worth a Smile’. The composers and lyricists are (same as for the previous album) all American and still alive. Many of the songs were specially written for Lisa Delan and some are world premiere recordings.

Lisa Delan wrote for the CD-booklet :

“When I recorded the partner CD to The Hours Begin to Sing – And If the Song Be Worth a Smile – I was delighted to include four premiere recordings, one of which I commissioned for the CD. I am thrilled with The Hours Begin to Sing to introduce four more premiere recordings, three of which were written specifically for this disc. And although I cannot claim parentage in this drama of creation, I am honoured to have been cast in the role of midwife.”