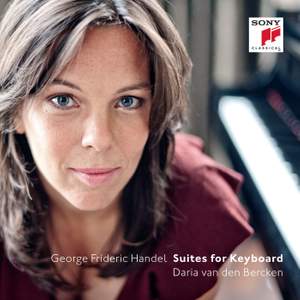 Her project, ‘Handel at the Piano’ is aimed at familiarising a worldwide audience with the keyboard works of George Frideric Handel. Daria recently addressed the TEDx Conference in Amsterdam on the subject of first reactions to music, particularly Handel, where she argued that creating opportunities is part of the musician’s work.

Daria is known for her innovative and unusual performance spaces, which include impromptu concerts in her home, performing in South America suspended from a crane above the audience, and being towed through the cobbled streets of Amsterdam while seated at a piano.

She has appeared as a guest on ‘Pauw & Witteman’, a Dutch late-night talkshow, to perform and discuss ‘Handel at the Piano’ to a 1.3 million viewers.

Fresh, unpretentious performances of Handel keyboard music on a modern Bösendorfer...This is a charmer of a recital...The final quick fugue [of the F major] is beautifully voiced; each line audible despite the fruity, resonant acoustic.