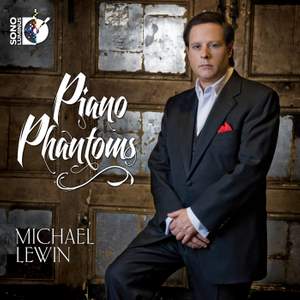 Lewin's eclectic recital is a delight from start to finish...you marvel at the archaeological skills which must have been required to exhume the obscurities on this disc...Lewin plays [the Tausig]... — The Arts Desk, 25th October 2013 More…

Night on the Fleet

Lyapunov: Round of Phantoms

Slatter (Norwegian Dances), Op. 72: No. 14. The Bridal Procession of the Goblins at Voss

Troyer: Ghost Dance of the Zunis

Eleanor Farjeon: Some Goblins and Gnomes and Things

Price, F: Goblin and the Mosquito

Hiller, W: Dance of the Phantoms

Rivé-King: March of the Goblins

Sono Luminus is proud to announce the latest project from Michael Lewin, 'Piano Phantoms', following the popular and critical success of 'If I Were a Bird' (DSL92103). This creative new recording is a collection of 18 piano pieces by a mixture of famous and lesser-known composers, each inspired by phantoms, goblins, ghosts and the spirit world. This program includes eight world premiere recordings.

Mr Lewin commented, “It was a great pleasure to make a second theme recording for Sono Luminus. The entire process is so exciting— musical discoveries, the unearthing of new repertoire, creating a wonderful and interesting program, learning and performing the music, then finally, recording in the beautiful Sono Luminus studios in Virginia. The response to our first disc together, If I Were a Bird, has been warm and gratifying, and I hope that our listeners will also enjoy this slightly more shadowy cast of characters!”

Michael Lewin enjoys a distinguished international reputation as one of America’s most abundantly gifted and charismatic concert pianists, performing to acclamation in 30 countries. Commanding a repertoire of 40 piano concertos, Michael Lewin has appeared as soloist many major orchestras. He has premiered two Concertos by David Kocsis and performed Gershwin’s Rhapsody in Blue over 50 times.

Lewin’s career was launched with top prizes in the Franz Liszt International Piano Competition in the Netherlands, the American Pianists Association Award and the William Kapell International Competition. Following his notable New York recital debut in Lincoln Center, The New York Times wrote that “his immense technique and ability qualify him eminently for success.” Since then he has played widely in solo recitals, with orchestras, and as a chamber musician.

'Piano Phantoms' is a tour-de-force of virtuoso pianism and imaginative musicianship. Michael Lewin’s artistic tone-painting, control of tone colours and ability to tell stories through sound gives unique life to each ghost and goblin.

Lewin's eclectic recital is a delight from start to finish...you marvel at the archaeological skills which must have been required to exhume the obscurities on this disc...Lewin plays [the Tausig] with virtuosic panache and real affection...The recording quality is sensationally vivid.