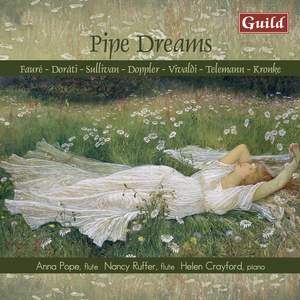 This recording contains a selection from the two flute and piano trio Pipe Dreams’ repertoire, spanning several centuries. From the eighteenth century come the Trio in F major by Telemann and the Trio in G minor by Vivaldi. Franz Doppler contributed greatly to the nineteenth-century virtuoso flute repertoire and two of his compositions are heard here; his Duettino (on Hungarian themes) and Andante and Rondo. Also from the nineteenth-century is Emil Kronke’s light-hearted Deux Papillons. Arrangements of Fauré’s Sicilienne and Cantique de Jean Racine and Arthur Sullivan’s Twilight exhibit the lushness found in much of the late-nineteenth and early twentieth-century repertoire, and two unaccompanied duets provide short excursions into folk and contemporary music, both eastern European; one, a traditional Bulgarian dance entitled Daichava Chara in characteristic 2+2+2+3 rhythm, and Capriccio, written in 1980 by Hungarian-born Antal Doráti, the renowned conductor. Nancy Ruffer, Anna Pope and Helen Crayford formed their trio Pipe Dreams in 1992. They have performed in and around London and provided entertainment for a variety of occasions. Each member brings to the trio her own experience as an established musician not only in London but internationally as well, performing as soloists, orchestral and chamber players.