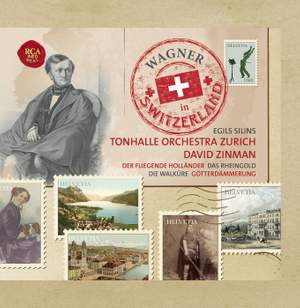 Celebrating the 200th Anniversary of Wagner in 2013, David Zinman conducts the Tonhalle Orchestra Zurich performing Scenes and Orchestral Pieces from “The Flying Dutchman” and “The Ring of the Nibelung”.

David Zinman is one of the world’s finest, most respected conductors, whose passion for music, dedication to furthering careers of young musicians and as an orchestral builder makes ‘music a better world’.

This CD features famous international Wagner baritone Egils Silins who can be heard as “Dutchman” and as “Wotan”.

Zinman has extended his contract with the Tonhalle Orchestra Zurich until 2014, where, since 1995 as conductor and music director, he has raised the standard of the orchestra to an international level.

Zinman’s previous recordings on Sony have been received with superb critical acclaim.

In January 2006, David Zinman, received the prestigious Theodore Thomas Award, presented by the Conductors Guild in New York’s Roosevelt Hotel. The award is presented biannually to a conductor, in recognition of outstanding achievement and extraordinary service to one’s colleagues in advancing the art and science of conducting, reflecting honour on the profession.

all Zinman's success in the German repertoire from Beethoven to Strauss breeds period-conscious, exciting Wagner from him and his players, never over-bloated to a later-in-the-century sound.

[Silins] has a powerful voice that has a colour and tone that are absolutely right for Wagner...[he] sings Wotan's Farewell from Die Walkure with great presence and steely resolve where it's called for, but he is not afraid to produce real tenderness in places.

It's superbly done. Zinman's speeds are on the relaxed side, but there's wonderful transparency in the playing, far removed from the thick textures favoured by some interpreters. A thrilling account of Siegfried's Rhine Journey is the high point.