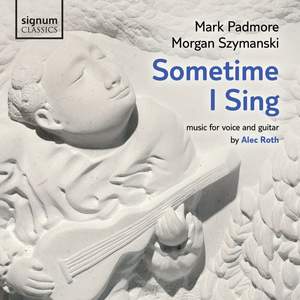 Music for Voice and Guitar

I. Sigh and Moan

VI. Out of My Mind

III. All You Who Sleep Tonight

IV. Dance To Your Daddy

Roth, A: Lights Out

Roth is a UK-based composer who works across a wide range of musical genres, including stage works, vocal, choral, orchestral, instrumental, and Javanese gamelan. His former posts include Founder/Director of the Royal Festival Hall Gamelan Programme and Southbank Gamelan Players, Music Director of the Baylis Programme, English National Opera and Associate Composer, Opera North. This is his third disc with Signum, following a choral album with Ex Cathedra (SIGCD270) and a chamber music disc 'Songs in Time of War' (SIGCD124) also with Mark Padmore and Morgan Szymanski.

Roth's song cycle My Lute and I harnesses language and music in a highly effective alliance...Padmore's flexible voice, with its high register being exploited to particular fruitful effect, is the ideal vehicle for this repertoire

[My Lute ande I] is an excellent and most appealing set of songs which I enjoyed very much; the performance is surely definitive...This is a delightful disc containing some highly accomplished and very imaginative music, beautifully written for voice and guitar.

Padmore’s clean tenor finds an ideal vehicle ... there’s a transparent, haunting beauty about it, and the accompaniments for violin, harp and guitar are a joy