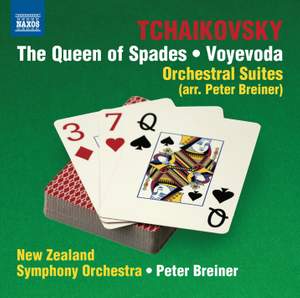 Tchaikovsky: Suite from 'Queen of Spades'

I. Tomsky's Ballad: Once upon a time in Versailles

II. Hermann's Arioso: The name of her I do not know

IV. Lisa's Arioso: Night or day, 'tis only him

V. Tomsky's Song and Gamblers' Chorus: They met on an unhappy day

VI. Hermann's Aria and Finale: You today, me tomorrow

I. Mariya Vlasevna: Guards were put upon the door

III. Olyona and Dubrovin: Trust me, my dear

IV. Dubrovin's Aria: Silent is the heart in my tortured breast

V. Dance of the Hay Girls

Slovak-born composer and conductor Peter Breiner has received considerable international acclaim for his adaptations, and his Tchaikovsky arrangements are particularly impressive examples of his art. He has already arranged The Seasons (8553510) and Songs (8555332) but here he turns to opera. With deftness and subtlety he has taken motifs from Tchaikovsky’s first opera Voyevoda to craft six richly scored movements, two of which have rôles for solo strings. The Queen of Spades was composed in 1890 and Breiner’s selections fully explore the music’s romance and drama in their new form.

Peter Breiner has won a particular niche for his ingenious arrangements, and he has arranged and recorded a number of Tchaikovsky discs before. Here he tackles opera in the same spirit of rich communicative warmth bringing to an early opera (Voyevoda) and the later The Queen of Spades the qualities of orchestral eloquence that he has displayed elsewhere. These excerpted pieces, so cleverly transformed from their vocal origins to orchestral form, communicate the vitality and lyricism inherent in the music.