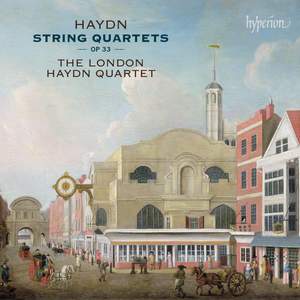 amazing precision of intonation and articulation. Yet the piecing [sic] intensity of their virtually vibrato-less style, enhanced by the bright, resonant Hyperion recording, can sometimes weary... — BBC Music Magazine, September 2013, 3 out of 5 stars More…

A fourth volume of Haydn String Quartets finds period band The London Haydn Quartet on sparkling form. Their previous recordings have been praised for the ‘glowing sound of gut strings played perfectly in tune … the ensemble’s delicacy of nuance and sensitivity to harmonic colour, treating the listener as a privileged eavesdropper’ (Gramophone).

This competitively priced set contains the six Op 33 quartets, which Haydn wrote in Esterhazy after neglecting the genre for a decade, and which immediately became popular around Europe on publication.

amazing precision of intonation and articulation. Yet the piecing [sic] intensity of their virtually vibrato-less style, enhanced by the bright, resonant Hyperion recording, can sometimes weary the ear.

[the playing] is indeed good, the lovely plangency of gut strings combining with that characteristic 'ticking' that's so much a feature of ancient instruments...These musicians know how to have gentle fun together - and they seem happy to welcome interested listeners in to share it with them.

The LHQ’s style might seem less fierce in attack than that of the most admired modern-instrument quartets, but that pays dividends, especially in the serene slow movements...this delectable set is a bargain, too.